The holidays are behind us, the college boys are done with their bowl party, and Alabama and Clemson will battle tomorrow night to claim the National Championship.  That being said, it’s time to turn the focus from the kiddie table to the professionals.

The National Football League opened its Wild Card weekend yesterday with the Texans and Seahawks advancing by dispatching the Raiders and Lions.  The Dolphins, Steelers, Giants and Packers step up to the table today with the Patriots, Chiefs, Cowboys and Falcons waiting in the wings.

You gotta love the NFL playoffs.  You hear so much about how game 7 is the ultimate in struggle in baseball, basketball, and hockey.  In football it’s ALL a game 7, win or go home, one shot to move on.  This time of year makes me reflect on what has gone on in the playoffs over the years.

I give you my top five!  Now keep in mind that these are playoff moments only.  None of these occurred in the Super Bowl, that’s for another time. 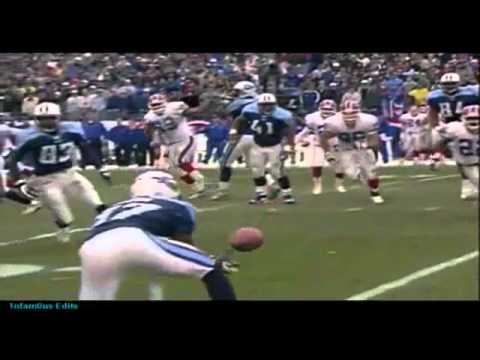 The Buffalo Bills had taken a 16-15 lead with sixteen seconds remaining in their AFC Wild Card game against the Tennessee Titans.  Having seemingly sewn up a trip to the divisional round they kicked off, what happened after that was a return for the ages.  The Titans put all of their “good hands people” on the field for the return.  Tight end Frank Wycheck threw a lateral pass to wide receiver Kevin Dyson.  Dyson would run 75 yards for a winning touchdown sending the Titans to the next round and sending the Bills home.

This was also an AFC Wild Card matchup between the same two franchises in moment #5.  The Buffalo Bills vs. the then Houston Oilers.  The Oilers would eventually move to Nashville and become the current day Tennessee Titans.

Future Hall of Famer Jim Kelly was out with an injury, and the powerful Bills offense was led by backup Frank Reich.  The Bills were two-time AFC Champions at the time.

Oilers quarterback Warren Moon, a future Hall of Famer himself led a dominant Oilers offense that took a 28-3 lead into the locker room at halftime.  Things didn’t get any better after the break for Buffalo.  Only 1:41 into the third quarter Reich would throw a pick six to give Houston a 35-3 lead.

Star running back Thurman Thomas was injured during the game, putting another hole in Buffalo’s woes. Then the wind shifted, literally.  The swirling winds at Buffalo’s Rich Stadium turned during the third quarter and so did the hometown team’s fortunes.  Reich would lead a comeback with 28 third quarter points to pull within a touchdown.  They would tie the game at 38 sending it into overtime where they won it with a field goal.  To date it’s the biggest comeback in NFL history.

The Cleveland Browns were leading the AFC championship game 20-13 over the Denver Broncos with a little over five minutes left in the game.  John Elway and the Broncos offense began a drive on their own 2 yard line.  Elway would engineer a drive that would culminate with a five yard touchdown pass to Mark Jackson.  With the extra point the game was tied at 20 with 37 seconds remaining.  Denver would go on to win in overtime sending them to the Super Bowl.

Roger Staubach throws a hail mary pass as time ran out and hits Drew Pearson in the end zone.  The touchdown defeats the Minnesota Vikings and sends the Cowboys to the Super Bowl.

This one also involves the Cowboys.  The Cowboys lead the San Francisco 49ers 27-20 in the NFC Championship Game.  Joe Montana would lead the Niners on one final drive.  The drive culminated with a touchdown pass to Dwight Clark that would become known as simply “The Catch.”  With the extra point, the 49ers go to the Super Bowl, the Cowboys go home.

With the Oakland Raiders leading the Pittsburgh Steelers 7-6 in an AFC Divisional Playoff game, the Steelers had the ball with 22 seconds remaining.  With 4th and 10 on their own 40 yard line quarterback Terry Bradshaw would throw a pass toward running back Frenchie Fuqua. Fuqua caught the ball, but a jolting hit by Raiders safety Jack Tatum vaulted it high into the air.  Franco Harris was Johnny on the spot and scooped the ball up before it hit the ground! Harris ran the ball all the way to the end zone giving the Steelers a 13-7 victory.

What will happen this year?  Is there going to be another “drive?”  Perhaps we’ll have another miracle finish or comeback.  Will this year’s playoffs yield another hail mary or catch?.  With a team’s entire season on the line anything historic can happen.

`With the holiday season  in full swing there is so much activity around us.  Office Holiday parties, Christmas tree vendors lining the roads, homes being lit up with holiday cheer, and of course crowded stores.  This can only mean one thing.  Lots and lots of college football!

Although that sounds like a wonderful promo, it’s not necessarily a good thing.  I just took the time to count up all of the bowl games on this year’s NCAA docket.  The total comes to a whopping 40 bowl games plus the National Championship Game.  It was reported towards the end of the NCAA regular season that this year (as was the case last year) there are more bowl games slated than appropriate schools to fill them.  This will once again, result in teams with losing records qualifying for bowl berths.

In looking at the schedule of this year’s barrage, I have a few questions.

Of course, the point I’m making is too much of a good thing brings in the law of diminishing returns.

I do understand that ESPN, FOX, CBS and NBC have contractual obligations with the NCAA to promote the bowl schedule and the National Championship.  Here’s my suggestion.

We all know that the current championship  format centers around a practically hand-picked final four.  This year’s winners are Alabama (1), Clemson (2), Ohio State (3) and Washington (4).  The National Semi-Finals will take place on New Year’s Eve at 3:00 (Peach Bowl in Atlanta) and 7:00 (Fiesta Bowl in Glendale, AZ), with the Championship taking place on Monday night January 9th at Raymond James Stadium in Tampa.

The semi-final schedule was moved up from last year so not interfere with the stroke of midnight when nobody is watching football and all eyes are on Times Square.  Call me crazy but how about championship college football the way it was for decades?  Being played on New Year’s Day itself? (or January 2 this year since January 1 is a Sunday and will belong to the NFL as is usually the case).

In my opinion the format itself is still flawed.  I know many are going to agree with me when I say that the top four ranked teams aren’t enough to decide a national champion.  Again I offer a suggestion.

Instead of not having enough suitable talent to fill up 40 post season games, and leaving many worthy schools shut out of playing for the national championship, consider this.  Instead of minor bowls consisting of sub-par schools, lets include some of them in the playoff schedule.

Just like the four brackets in the NCAA basketball championship, which consist of 16 teams, why not make the football tournament one bracket of 16?

This year’s schedule would play out something like this:

December 23 (since the NFL is playing on Christmas Eve this year):

This format would allow the top 16, which would include the winners of the major conferences, to actually play in a tournament.  It would also give meaning to some of the bowls that are played during the week at odd times when nobody is really watching by having them scheduled on the weekend.

All of that being said, the current format is what it is.  Let’s sit back and watch our college kids play on their somewhat big stage and see who comes out on top.