After a hiatus of nearly a year , I am back, I am ready and I’m excited!  Beginning today I will be back here on WordPress, Facebook, Twitter, and LinkedIn every Sunday.  So to quote CNN’s Chris Cuomo, “Lets get after it!”

The baseball world lost an icon this week.  Frank Robinson, the only player to win the Most Valuable Player award in both leagues, and the game’s first African-American manager passed away at the age of 83 on Thursday. Rest well Frank and thank you for all you did for the game of baseball!

Frank Robinson, baseball’s first African-American manager and the only player to win MVP awards in both leagues passed away this week.

For all of us from the Midwest to the east coast, the past couple of weeks have been historically cold, snowy, and icy.  I offer all of you a break in the madness today.  This week training camps in Florida and Arizona will be opening their gates to pitchers and catchers.  Spring games will begin next week.  The crack of the bat, albeit in the tropics and desert, will hearken the coming of spring.  With that being said, let’s talk about some baseball!

The New York Mets began play in the National League in 1962.  The ballclub brought in to replace the iconic New York Giants and Brooklyn Dodgers had an ominous beginning to its existence.  The “lovable losers” finished their inaugural season with a record of 40-120.  They trailed the league champion San Francisco Giants by a whopping 60 1/2 games.

The years that followed were not kind to the Mets.  New York failed to place higher than ninth in the ten team league from 1963 to 1968.  The club also suffered through seven consecutive losing seasons.

In 1967, George Weiss was replaced as the Mets general manager.  This move was the first step in a change of fortune for the lovable losers.  Weiss was replaced by Bing Devine, the architect of the St. Louis Cardinals teams that won the World Series in 1967 and the National League championship in 1968.  Devine would draft what became the core of a “miracle.”

Young stud pitchers Jerry Koosman, Nolan Ryan, Gary Gentry, and Jim McAndrew were all signed under Devine’s tenure with the Mets.  He also added one more centerpiece, with the help of lady luck.

In 1966, a young USC right-hander named Tom Seaver was drafted by the Atlanta Braves.  Baseball commissioner Willliam Eckert voided the contract that Seaver signed with the Braves because USC had played two exhibition games that year.  Seaver did not appear in either game.  Seaver then planned on playing college ball in 1966, but was declared ineligible by the NCAA since he had signed a contract with the Braves.  After a threatened lawsuit against Major League baseball by Seaver’s father, Eckert ruled that teams could match Atlanta’s offer.  The Mets won a lottery for Seaver’s services, beating out the Cleveland Indians and Philadelphia Phillies. 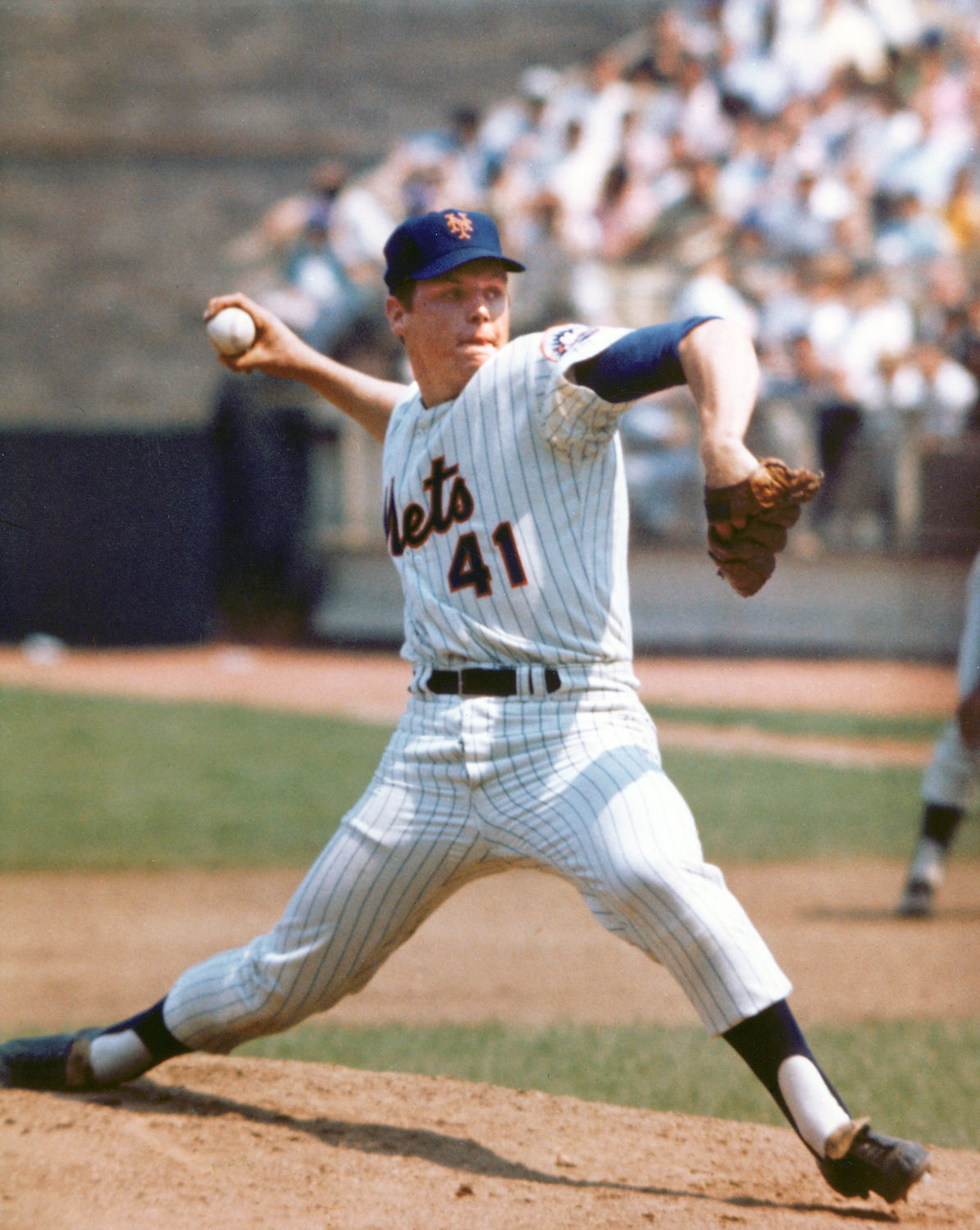 Tom Seaver was the crown jewel of the draft class of 1966.  He was the National League Rookie of the Year in 1967 and to this day is the face of the Mets franchise.

Following that monster front office year of 1967, Devine left the Mets to return to the Cardinals.  Johnny Murphy replaced him and continued to build what would become the Miracle Mets.

Murphy’s first move as New York’s general manager turned out to be huge.  He engineered a trade with the Washington Senators for their manager!  Yes, a major trade involving a manager.!  Pitching prospect Bill Denehy was dealt to Washington in exchange for manager Gil Hodges.  Hodges was the first baseman on the Dodgers team that departed from Brooklyn in 1957.  He returned as an original Met in 1962 and was always a fan favorite in New York.  Hodges also knew how to win, this sent a message to the rest of the National League, the Mets were done being court jesters and were very serious about winning. 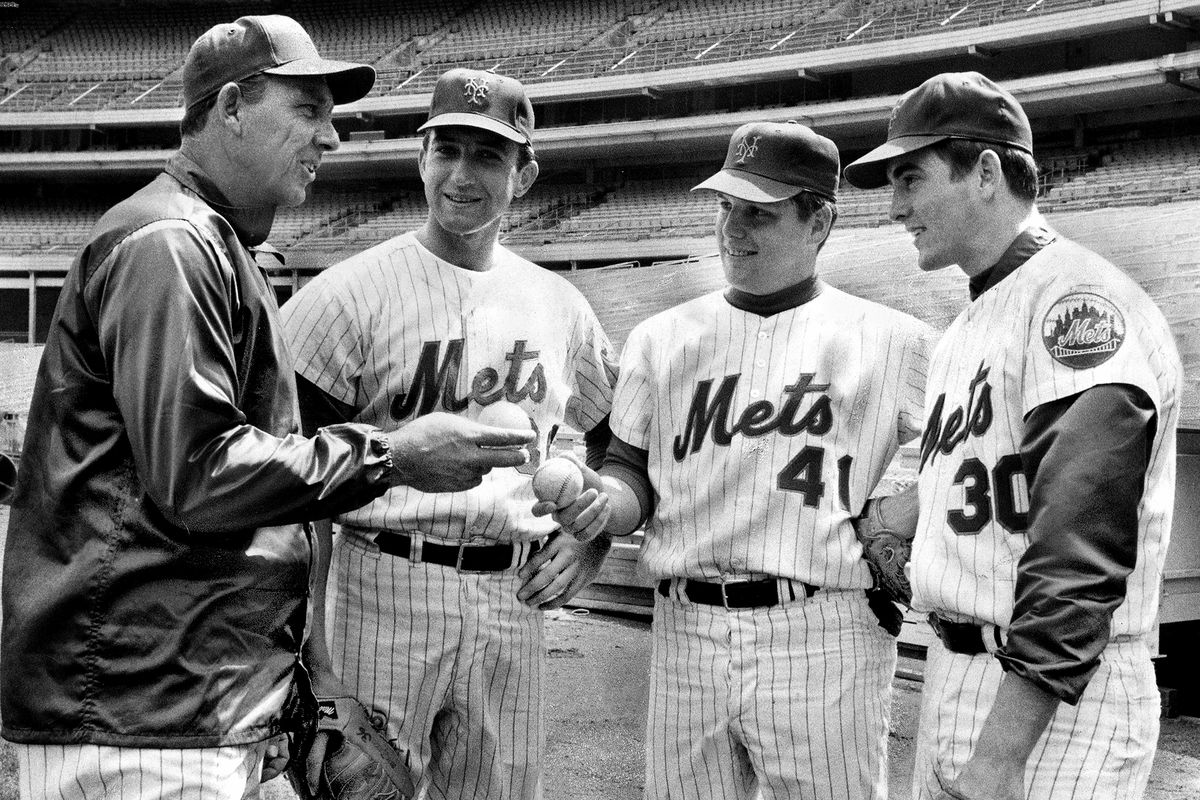 The signing of Tom Seaver and Nolan Ryan, and the hiring of Gil Hodges legitimized the Mets as a serious baseball team.

All of these new arms worked well with catcher Jerry Grote.  Grote was acquired from the Houston Astros following the 1965 season.  Grote became the starting catcher immediately and grew with the team.  Outfielder Cleon Jones signed with the Mets in 1963 and became an integral part of the growing team.  Shortstop  Bud Harrelson debuted with the Mets in 1965 and grew to become the glue of the Mets infield.

Murphy added to the growing talent pool with a couple of key trades.  Following the 1967 season, the Mets sent Tommy Davis ( a perennial .300 hitter)., Jack Fisher and two minor leaguers to the Chicago White Sox in exchange for Tommie Agee an Al Weis.  Both players would play key roles in the 1969 season and postseason.

Perhaps the last piece of the puzzle came during the 1969 season itself.  On June 15, 1969 the Mets dealt Steve Renko, Kevin Collins, and two minor leaguers for first baseman Donn Clendennon.  Clendennon would go on to win the 1969 World Series MVP Trophy.

It’s been 50 years since the Amazins were assembled.  A half a century later there is still a lot to cover.  Next week I will chronicle the 1969 season itself.  It was a doubly memorable year for this writer.  As a young boy in Southeast Queens, the Mets were the team that I grew up with.  That wonderful year was the first time I really followed the game of baseball.  See you next week!

I dedicate this article to my son, Justin.  As many of you know, we lost him to suicide two years ago.  This coming Thursday will mark two years since that horrible morning.  We also got some heartbreaking news on January 5th of this year.  A dear friend of the family, “Coach” Mike Young passed away from a heart attack.  I know that they are reunited in heaven.  I miss you son, more than any words that can be written.  I miss you too, my brother in coaching.