In a second of a three-part series of World Series memories, I turn to the long ball.  There are three individual performances that come to mind.

We begin at Yankee Stadium in the Bronx on the evening of October 18, 1977.  It was a classic match-up in the World Series as the Dodgers and Yankees met for the ninth time.  On that mid October evening the Series returned to New York with the Yankees holding a 3-2 lead.  Few people remember the fact that the Bronx Bombers sent the Boys from Hollywood home via a 7-3 victory.  Many remember that the Yankees put the finishing touches on their first World Championship since 1962.  The one thing that any baseball fan from that era would remember was the show put on by Yankees right fielder Reggie Jackson.

Reggie Jackson of the New York Yankees homers on three consecutive pitches in Game 6 of the 1977 World Series.

In the game in which Jackson earned the nickname “Mr. October,”  he came to bat in the second inning and drew a walk.  His second at bat was in the fourth inning.  Reggie took Dodger starter Burt Hooten’s first pitch and deposited it in the right field bleachers.  When he came up again in the fifth inning.  New York had two runners on and two out.  Jackson drilled Dodgers reliever Elias Sosa’s first delivery into the bleachers.  As Jackson emerged from the home dugout in the eighth inning, the crowd gave him a standing ovation.  Reggie didn’t disappoint.  Knuckleballer Charlie Hough was on the mound for Los Angeles, and his first delivery was deposited 450 feet into the centerfield bleachers!  Three swings, three home runs!  And, by the way, a Yankees victory and World Championship.

Now let’s back up two years and head a little further north along the east coast.  The year is 1975, the place is another iconic setting, Boston’s Fenway Park.  This was also a Game 6, with the Cincinnati Reds looking to wrap up a World Series championship.  What unfolded was one of the greatest games ever played in the Fall Classic.

The Red Sox took the early lead in the bottom of the first inning, courtesy of a Fred Lynn three run homer.  In the top of the fifth the Reds got on the board when Ken Griffey, Sr. tripled to score Pete Rose and Ed Armbrister.   Johnny Bench singled home Griffey to tie the score at 3.  George Foster gave the Reds a 5-3 lead in the top of the seventh with a two run double.  Reds’ centerfielder Cesar Geronimo’s solo home run padded the Reds lead at 6-3.

The Red Sox came up in the bottom of the eighth, and this is when things got memorable.  Bernie Carbo came up as a pinch hitter with Fred Lynn and Rico Petrocelli on base.  Carbo would tie the game with a home run to left center.  The Red Sox were alive and breathing!

Red Sox catcher Carlton Fisk wishes the ball into fair territory as he hits a walk off home run in Game 6 of the 1975 World Series.

The game stayed tied at 6 through the middle of the twelfth inning.  Carlton Fisk lead off the bottom of the inning and hit one of the most memorable and iconic home runs in World Series history.  Fisk got a hold of a Pat Darcy pitch and sent it toward the left field foul pole.  As the ball was in flight toward Fenway’s Green Monster, the Red Sox catcher was waving at the ball to go to the fair side of the foul pole.  The ball would go fair, and the Red Sox would tie the series at 6 games apiece.  Cincinnati would win the Series with a 4-3 victory in Game 7.

Now we fast forward to 1991 and go to the Metrodome in Minneapolis.  The Minnesota Twins came home after letting a 2-0 series lead slip away in Atlanta.  The Braves looked to win their first ever World Championship since moving to Atlanta in 1966.

The Twins drew first blood in the bottom of the first inning when Kirby Puckett tripled to score Chuck Knoblauch.  Puckett would score when Shane Mack singled to make it 2-0.  Terry Pendleton tied the game with a two run shot in the fifth.  Minnesota put up a single run in the bottom of the frame, but the Braves would tie the game in the seventh. 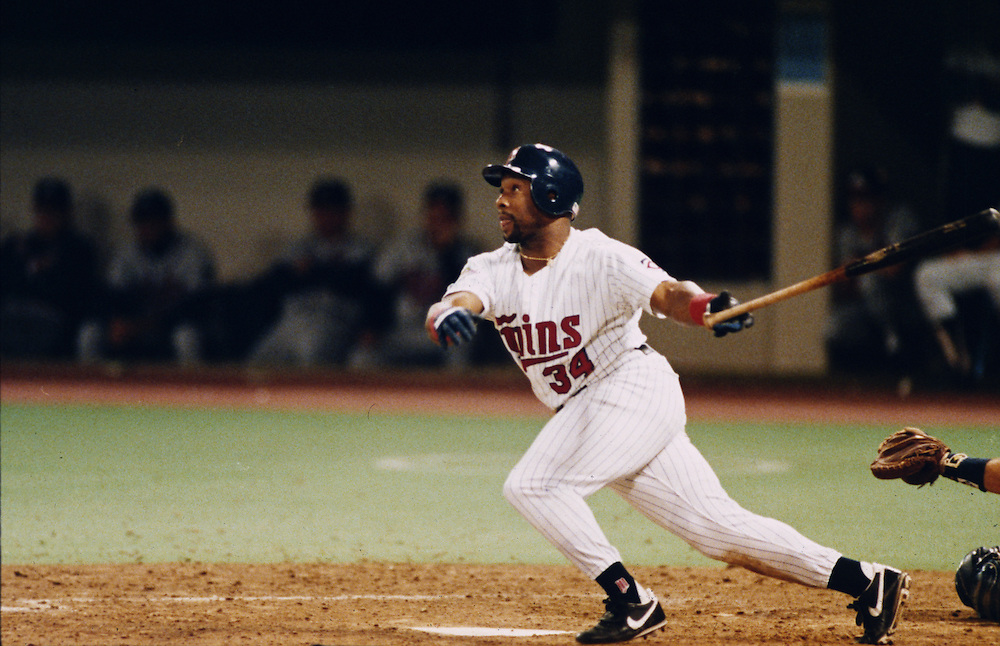 Twins’ Kirby Puckett hits a walk off home run in the bottom of the 11th inning to tie the 1991 World Series at 3-3.

The game would remain tied at 3 until the bottom of the 11th inning. Puckett would lead off the inning and hit a walk off home run to left-center field that prompted Hall of Fame announcer Jack Buck to simply proclaim “see you tomorrow!”  The Twins would finish the job the following night when Jack Morris pitched ten innings of shutout  ball.  The Twins won Game 7 by the score of 1-0.